James David Dickson, managing editor of Michigan Capitol Confidential, wrote an article about Michigan House Bill 6171, introduced in June (2022) by Representative Gary Eisen. The proposed bill reads: “Beginning with the 2022-2023 school year, the board of a school district or intermediate school district or board of directors of a public school academy shall ensure that each school operated by the board or board of directors develops or adopts and implements a policy that prohibits the use of personal cellular devices by pupils enrolled in the school during the scheduled school day when the pupil is at school. “At school” means in a classroom, elsewhere on school property, or on a school bus or other school-related vehicle.” Per Dickson, HB 6171 shows the faults of the “There Should Be A Law” mentality. Dickson wrote a compelling piece skewering the bill – and this episode will spelunk those, and other, rabbit holes for and against banning cellphones in school, with 7 reasons to not ban cellphones and 7 reasons to ban them.

DIRECT LINK to MP3 of this Episode: https://tinyurl.com/SDP185-AUDIO

(1) CELLPHONES ARE PART OF LEARNING. Cellphones are inseparable from learning. By 2007, educators conceded that cell phones could play an important part in learning. Universities started using text messages to reach out to students, and a survey released by Cingular Wireless indicated that parents believed text messaging helped to improve communications with children (Loveless, 2022). (2) SCHOOL SAFETY. School safety is enhanced by cell phones. Although phone-based danger reporting or incident notification apps are not nearly as effective or reliable as purported by their enthusiastic vendors, they hold much potential for the future of personal safety. If each student’s phone was viewed the same way we view smoke detectors, it would be unthinkable to remove them from our schools. (3) SINGULARITY IS INEVITABLE. Banning cellphones is an update to the 1970s argument to ban calculators. Schools are slow to infuse technology into curriculum and operating systems. Today, kids flash an electronic ticket on their phone to attend their school’s sporting event. Futurist Ray Kurzwel predicts that something known as ‘singularity’ will happen around the year 2045. Singularity is a merging of the human brain with computers and AI. It might be a form of neural link. At that point, will school require students to disconnect their links during instructional time, to remove their slim 3D projection goggles, etc.? In 20 years, cellphones will be a relic of the past. (4) COMMUNICATIONS. Be it text, email, or call, the cellphone makes communication efficient and reliable. I remember a 1990 computer lab where logging in via modem speed and bringing up text-only email once or twice a day was considered cutting-edge mass communications. (5) NAVIGATION. GPS and navigation apps, such as What3Words and Waze, help students navigate the campus and have an enhanced comprehension of their surroundings. With the What3Words app, rescuers could respond to a 3 meter by 3 meter square area where the student – or the student could share their location as a gathering point for teammates getting off a bus for a competition. (6) IMPOSSIBLE TO ENFORCE. Schools are operating short-staffed and enforcing cellphone violations is not a realistic expectation of time-strapped staff or administration. BOEs won’t be able to undo bad state policy. And, Policing cellphones damages school connectedness. And, what are the consequences for breaking this law? (7) PROTECTION. Cameras provide evidence, especially when deep fakes can shame or destroy a person. In 2021, an allegedly crafted fake video of Pennsylvania high school cheerleader Madi Hime vaping resulted in her being kicked off the cheerleading squad. The student’s mother contacted the police, sparking an investigation, and involvement of legal counsel. As deepfake technology becomes easier and cheaper to use, these types of “alleged” claims will overwhelm school staff and local police departments. Having the option to present recorded video might help in one’s defense.

(1) OVER-RELIANCE ON TECHNOLOGY. Cellphones are integrated into most information-storing and retrieving aspects of our lives. Any kid attending school in the 1970s remembers that pocket calculators were prohibited in most schools. The argument against electronic calculators was that the student wouldn’t be motivated to learn the intricacies of the math equations – but rather, the sequence of formulas – which were also becoming more integrated into shortcuts in the calculators. “You won’t always have a calculator with you to figure out the slope of a tangent line,” teachers said. In 1984, I wore a scientific calculator watch on my wrist. The banning of cellphones today was the banning of personal learning technology devices (tablets, iPads) ten years ago. And while we think cell phones as learning tools in schools is a new idea, it’s important to remember that a school in Brooklyn began distributing cell phones to students way back in 2008! (2) DISTRACTION. Social media companies employ psychologists and human behavior experts in order to hone their sites to be as addictive as possible. And everyone, not just kids, spend arguably “too many” hours a day interacting with their phones. But instead of flat out banning cellphones, they could be parked during certain instructional times, or incorporated into the teaching / learning tool process. The app ‘Poll Everywhere” can be used for students to vote on a topic. It enables most students to participate and works around the groupthink of one or two students stating an answer and the rest of class falls in line with the claim. Imagine a class topic about household chemicals. Students capture photos of chemicals found in their phones. These photos are transmitted to the classroom’s online site. In the following lesson, the teacher and students discuss how to classify the chemicals – as medical supplies, detergents, fuel, discretionary, and so on. (3) BULLYING. Cyberbullying is real and is an unsavory side effect of social media. The 2019 School Crime Supplement to the National Crime Victimization Survey (National Center for Education Statistics and Bureau of Justice) indicates that, nationwide, about 16 percent of students in grades 9–12 experienced cyberbullying. (4) RECORDING INSTRUCTION – PROPRIETARY MATERIAL. Most schools purchase curriculum packages for hundreds of thousands of dollars and adhere to strict protocol for not sharing proprietary learning materials. This was tested during online instruction during the pandemic. In addition, would a school want students to record and post intruder drill protocols or other sensitive information? (5) DEEP FAKES. The integrity of instruction is at stake. A cellphone makes it exponentially easier for a student to create a deep fake of school staff saying something that would land them in hot water. Schools are way behind the curve with figuring out how to respond to deep fakes. Banning phones might limit the opportunities for deep fakes. (6) EQUITY. Equity was an argument against one-to-one electronic tablets or iPads for students. Only the affluent students would be able to afford the technology. And then, BOEs adopted 1:1 policies and funded devices for all students. Most students have 1:1 devices. It would be a similar BOE action to bring forth 1:1 cell phones. (7) SINGULARITY – As mentioned earlier, humans and AI will merge at some more invasive  level – and probably within the next 20 years. We’ve already achieved the first few steps of singularity with our cell phones. But with singularity comes a great push to store our knowledge ‘in the cloud.’ This is known as cognitive offloading and was written about in great detail in the book The Velocity of Information – Human Thinking During Chaotic Times (2022). If we become out-of-balance dependent on going to our phone as the arbiter for each decision in our life, we are at risk for being unable to figure things out if the Internet fails – perhaps due to hacking, solar flare, EMP, etc. Counter this by integrating phones with real-world applications. Use the GPS on the phone for a scavenger hunt in the authentic environment of a park or school grounds.

This is episode 185 of The Safety Doc Podcast published on 09-06-2022. This podcast and blog post represent the opinions of David P. Perrodin and his guests to the show. The content here is for informational purposes only. Please consult with your safety professional regarding the unique needs of yourself or your organization. 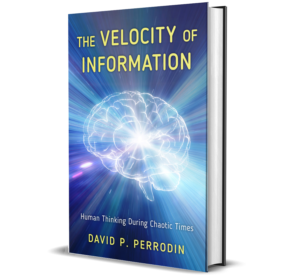 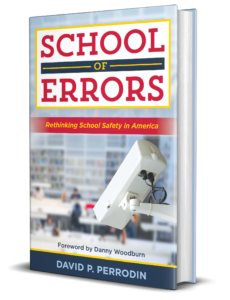